I have been working with patients with autoimmune issues since 1976. During that time, I have seen these disorders become an extraordinarily common chronic health issue. As discussed in Part I of this two-part series, one hundred forty variations of autoimmune disease have been named afflicting fifty million Americans with the numbers rapidly increasing.

In any disease affecting large numbers of people, medical clinics, drug and supplement companies and purveyors of other products have jumped on board to capitalize on this issue. What they have in common is their similar orientation to “treat” autoimmune disorders. This is starting out on the wrong foot.

What can be wrong with “treating” a disease? A great deal! Conventional, Alternative, Functional and Naturopathic Doctors “treat” diseases, including autoimmune issues (read “The Facade of Functional/Alternative Medicine”). This is also the primary reason why they fail to reverse these conditions. When we “treat” a disease we are “treating”/addressing the individual’s symptoms in an attempt to suppress them. Whether it be a drug such as a steroid, a “Biological”, an herb, homeopathic agent, etc., when we treat a disease we are not addressing the causes of the disease and do not build long lasting health. Read “Escape the Treatment Mentality”.

Autoimmunity affects the entire body although one area such as the joints, muscles, a gland, the gastrointestinal tract or other specific area might be more symptomatic. Over the years I have observed that patients with autoimmune disorders tend to collect/add more of these conditions/diagnoses as time progresses i.e., they are labeled with multiple autoimmune titles over time. The patient with psoriasis develops ulcerative colitis, the patient with colitis develops rheumatoid arthritis, etc. Symptoms have changed but the causes likely have remained the same. If we simply “treat” the disease name, a satisfactory outcome will evade us. If we address what is wrong with our health and go through a rebuilding/transformation process, we are on the right path… a safe path that also has no side effects. Regarding symptoms; when the specific causes of a patient’s autoimmunity are identified and addressed, their health can blossom and their symptoms dissipate as is demonstrated in the pictures below. Read “Stop Living with Chronic Disease: Choose to Re-Create your Body” and “Successfully Reverse Chronic Disease: It CAN be Accomplished”. 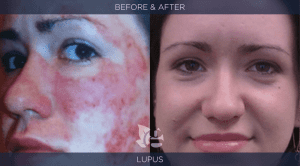 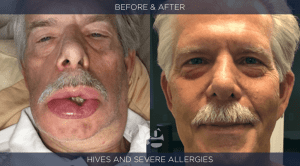 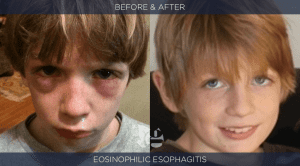 Relying on pills, potions and other quick symptomatic fixes.

It is a trait among humans even among those saying they are “naturally oriented”, that we like to take remedies… pills, potions, etc. We are a pill addicted species! We need to lighten up on the pill mentality where for every symptom we seek a pill to remedy it (this includes “supplements” that are often over-used by the public). Pills per se have their place but in chronic conditions like autoimmune diseases they are rarely priorities. Shown below are examples of the excessive supplements a few of our patients were taking prior to working with us. 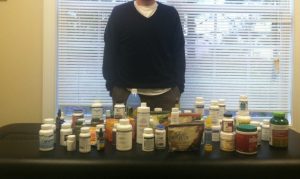 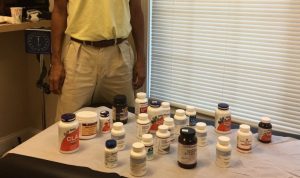 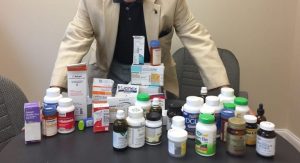 Going for the Real rather than the Magic

Identifying and addressing the causes of our autoimmune problems is hard work. A thorough investigation is required. The patient’s complete life history must be carefully explored starting with their family background, proceeding from their birth to the present. Genetic tendencies, a thorough look at potential toxic exposures through the years via the air, water, diet, pesticide exposure, drugs, emotional stressors, surgeries, accidents, marriages, divorces, occupation,…no stone can be left unturned. The history alone can take well over an hour before we proceed with a physical exam. After that a decision can be made as to specific laboratory studies based on the patient’s history and physical examination.

This is just the start. When the analysis is complete a report of findings is given to the patient. This will include a detailed plan of action that will typically impact multiple aspects of the patient’s life. The plan is implemented under professional guidance and then altered as needed in a methodical manner as the patient is “re-created” and progresses on the road back to health. Learn more about the Goldberg Tener Clinic Bio-Hygienic Re-Creation System™

Some people expect instant results for everything from instant coffee to instant health. If we have autoimmunity, it is not a cold or a simple case of the flu. It is not a pimple on the end of our nose. It is not an ingrown toenail or a sunburn. It is a deep seated (even in the young individual) issue affecting the whole person that has typically been many years in the making even though, at first, the patient may have been largely asymptomatic. A history of fatigue, indigestion, skin issues, joint discomforts or other nagging issues often precedes the full expression of autoimmune disease. See article “Chronic Disease and The Time Factor in Recovery”.

Understand the need for hard work, discipline and patience to overcome Autoimmune Issues

Rather than looking for treatments and quick fixes, we must face the fact that these are deep rooted problems. We can choose to take drugs or a variety of alternative “treatments” and be under care for “chronic disease management” for the remainder of our lives, or we can roll up our sleeves, identify what the causal factors are and address them…followed by a period of focused work. In taking this rational and effective approach we have the genuine prospect of opening up a door to renewed well-being and independence. A life where we take control of our health destiny. Several video interviews with our patients are shown below to illustrate this.

Contact us to see how we can assist you in regaining your health.

Griselle came to our clinic following a 9 year struggle with Rheumatoid Arthritis. Her Rheumatologist prescribed multiple drugs including Humira, Prednisone, Plaquenil and Celebrex yet her condition continued to worsen. Today, eighteen months later, Griselle has successfully reversed her condition and is drug free. She reports no pain and has returned to a full life. See before/after lab studies here.

Rose suffered from severe hives, chronic asthma and severe allergies for over three decades prior to seeing us. At the time of her initial visit, she was taking nine drugs prescribed by her Medical Physicians. Eighteen months later, Rose reports 90% improvement in her overall health. She has had no hives for six months, her asthma and allergies are significantly improved and she has reduced the number of drugs she is taking by 90%.

Nicolas suffered from severe Psoriasis, an autoimmune skin disorder. Lesions were present on his face, scalp, chest and back. He saw Dermatologists who prescribed skin creams and offered him Biological drugs that come with serious risks including cancer. Nicolas declined. Nicolas’s skin is 100% clear in all areas since coming to the Goldberg Tener Clinic. Nicolas is taking no drugs or treatments and is now in excellent health.

Addressing the root causes of Kayla’s autoimmune Thyroid disorder was accomplished by our performing a thorough, extensive history, examination and laboratory studies and developing an individualized program for Kayla to follow. Over the period of just a few months she found her health returning AND was able get off all prescription drugs including thyroid medication. She is now feeling well, her brain fog has lifted, her energy is elevated and she is once again in charge of her own health. See before/after labs here.

Related Articles by the Goldberg Tener Clinic
1) The Autoimmune Plague Part I: Addressing Causes and Building Health
2) Reversing Chronic Skin Conditions
3) An Effective, Causal Based Approach to Digestive Problems
4) Reversing Rheumatoid Arthritis and other Rheumatoid Conditions
5) Reversing Thyroid Conditions
6) Small Intestinal Bacterial Overgrowth (SIBO): A Symptom of Impaired Health
7) Irritable Bowel Syndrome: A Meaningless Diagnosis
8) The Facade of Functional and Alternative Medicine
9) An Effective, Comprehensive Approach to Reversing Allergies
10) You have been misled… the way to lose weight is NOT trying to lose weight.
11) Click here to see our full library of articles.