Ms. Kayla Davis came to our clinic with multiple concerns. She was suffering with fatigue, brain fog, chronic hair loss, bloating and generally not feeling well. She had been medically diagnosed with “Hashimotos Disease”, a now very common medical diagnosis indicative of autoimmune thyroid dysfunction and had been placed on the drug levothyroxine (read our article The Tragedy of Thyroid Hormone Replacement). Her history also included taking many courses of antibiotics, which had led to her developing small intestinal bowel overgrowth (SIBO).

All these issues which Kayla was being treated for, including Hashimoto’s Disease and SIBO, despite what physicians tell patients, are NOT the causes of disease…they are the manifestations of disease. After years of such treatments Kayla’s condition was worsening and the symptom list expanding.

Addressing the root causes of Kayla’s issues was accomplished by our performing a thorough, extensive history, examination and laboratory studies and developing an individualized program for Kayla to follow. Over the period of just a few months she found her health returning AND was able get off all prescription drugs including the thyroid medication.

As Kayla reports in the video interview she is now feeling well, her brain fog has lifted, her energy is elevated and she is once again in charge of her own health.

Kayla’s laboratory tests, including the SIBO and Thyroid Panel are now normal (see results below).

Numerous confusing titles given patients by Medical and Alternative Medical Practitioners such as Chronic Fatigue Syndrome, Adrenal Fatigue Syndrome, Candidiasis, SIBO, over a hundred autoimmune conditions, Fibromyalgia, Irritable Bowel Syndrome, etc., lead to “treatments” that do not build health and address causal factors. Manifestations of Disease are not the same as the Causal Factors that lead to chronic illness.

Kayla, with our guidance, took the bull by the horns and Re-Created™ her body through an individualized Goldberg Tener Clinic Bio-Hygienic Re-Creation Program™. The real causes of her symptom manifestations that had been unsuccessfully treated with a myriad of medical and alternative medical procedures were uncovered, addressed and resulted in her health being restored.

Before / After SIBO Test Results 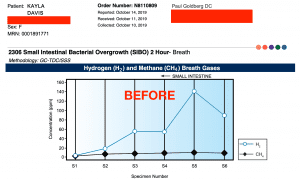 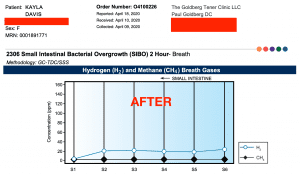