Posted at 18:07h in Uncategorized by David Tener 2 Comments
0 Likes

Problems with Prednisone: Why Inflammation is Not the Enemy 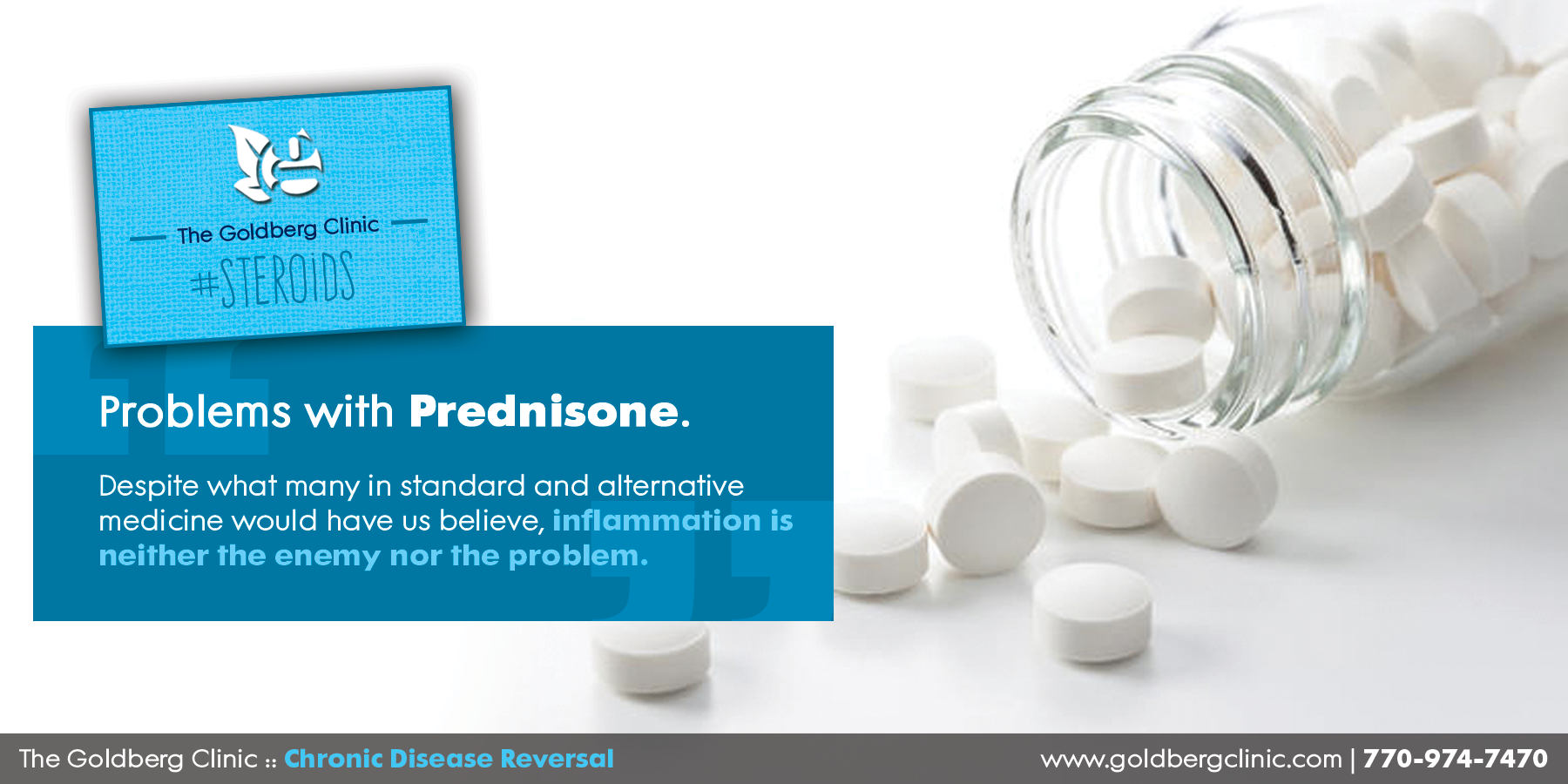 Over the four decades I’ve been in health care, one of the most challenging obstacles I’ve faced with patients has been medically prescribed corticosteroids. At times when interviewing a new patient I feel that I can simply assume they have been on steroids as the frequency of usage among patients we see is so great. Other common drugs used include extensive use of antibiotics, antacids, synthroid and anti-depressants… all making a patient’s journey back to health more difficult and complex.

The use of corticosteroids, including prednisone, are almost universally prescribed by medical physicians of every variety…general practitioners, family practitioners, internists, dermatologists, rheumatologists, gastroenterologists, urologists, etc. Corticosteroids are prescribed for numerous conditions that involve inflammation and/or allergic reactions including asthma, eczema, dermatitis, ulcerative colitis, crohns disease, sinusitis, iriditis, ear inflammation, bronchitis, nephritis, arthritis, bursitis, neuritis, carditis, thyroiditis and virtually every other medical condition including some cancers. It is the go to drug for medical physicians, along with antibiotics, as it will suppress virtually any type of symptom…but at what cost?

The body protects itself against infection, toxicity, injury and other insults through inflammation. Despite what many in standard and alternative medicine would have us believe, inflammation is neither the enemy nor the problem. Inflammation is a constructive action purposely created by the body. It serves as a marshaling of the body’s resources and a key component in allowing us to recover from a wide variety of injuries and insults. To believe otherwise is to imagine that one of the most basic defense mechanisms of the body is a “mistake”… that the body is hapless in its actions and that we somehow know better. Such belief has allowed for the massive employment of not only steroids but also a plethora of other anti-inflammatory drugs obtained both over the counter and via prescription on a daily basis.

Inflammation is a manifestation of the body attempting to normalize function, to repel invading organisms, to eliminate toxicity and to gather the body’s reparative forces to the site of injury. It is the result of adverse circumstances, not the cause of them. Whatever might be causing inflammation needs to be addressed and eliminated. When this is successfully accomplished the inflammation will go away as its services will no longer be needed. Put simply…address and remove the causes of the inflammation and the body no longer has the need to produce it.

Our patients know that we are interested in renewing their health and vitality…not the mere suppression of symptoms that leads to further disease complications. The risks and complications of employing steroids are numerous and serious in nature and have adverse effects that can lead to a downward spiral in a person’s health and seriously lessen their opportunity for recovery. We continue to see numerous patients who have gotten on the corticosteroid train, often taking multiple steroid drugs from different physicians. A dependency on them is created that makes health restoration challenging.

Steroid usage makes it difficult to determine what is occurring with a patient physiologically as steroids deviously mask underlying conditions. They make it more difficult to make an accurate determination of the causes of a patient’s problems both in terms of performing an accurate physical examination and in conducting laboratory testing. Steroids mask underlying causes while undermining a person’s normal physiological state.

Common Side Effects of Prednisone and Other Steroids

In 1930 an extract of animal adrenocortical tissue was found to serve as a replacement for human adrenal glands that were failing. Steroids (Cortisone) were first clinically employed in the mid 1940’s. Their use was initially heralded as being curative for Rheumatoid Disorders and there was much optimism initially expressed in their application. Shortly after the other shoe dropped as serious side effects became visible. Patients had to take larger and larger doses to obtain the same amount of symptom suppression. Side effects (noted previously) such as cataracts, adrenal atrophy, mental disorders, osteoporosis, infections, etc., became widely evident. Nonetheless due to their dramatic initial suppression of symptoms steroids continue to be a cornerstone of medical treatment.

Challenges for Patients On Steroids

The longer a patient has been on steroids and the more they have taken, the greater the health recovery challenge is. Reversing the downward health spiral that long-term steroid usage causes is neither simple nor quick. Patients must understand that perseverance and a long-term effort will be required if the downward trend is to be reversed and health is to be regained.

If a patient is on steroids when we first see them, as is often the case, they will be advised to come off them as quickly as the prescribing medical physician deems prudent. Packages of steroids are often given in what is termed a “Medrol Pack” which starts the patient at a high dosage and then lays out a prescribed plan of reduction, built into the prescription, with the patient generally reducing their use by 5 to 10 mgs per week from the initial dosage of (typically) 40 to 60 mgs of prednisone per day.

Going cold turkey from even short-term steroid usage can be hazardous. The challenge is that as steroid usage is reduced, whatever symptoms they were prescribed for will likely return and often worse than they were previously. The steroids did not “fix” anything long term and in most cases have markedly weakened the bodies immune and endocrine systems. Skin disorders often re-erupt, joint pains often return with vigor (sometimes excruciatingly so), colitis symptoms may return with a wicked vengeance including increased cramping, bleeding and frequency of diarrhea. Whatever the steroids were prescribed for comes back even worse in a large number of cases. The phrase enjoy now and pay like hell later is appropriate in regards to the employment of medical steroids. In these scenarios the medical physician will often times simply prescribe another round of steroids. This further complicates the chances for a long-term improvement in the patient’s health. To not get off the steroids will diminish the opportunity for the person to ever live a healthy life.

The frustration and anxiety many patients experience seeing the return of symptoms is common. The discomfort involved in the withdrawal of steroids can be severe. Many feel hopeless not knowing where to turn. We tell them that the road back is going to be difficult but to continue on the corticosteroid train is a one way ticket to defeat. The longer one stays on steroids, the more times prescriptions are employed, the less the opportunity becomes to return to dependable health.

The Goldberg Tener Clinic develops protocols that we employ in helping patients get through steroid withdrawal, each of which must be tailored to the individual and are based on their own case. Physiotherapy, nutrient support, extensive rest and sleep, sunlight, and encouragement are all important. Corticosteroids are anti-nutrient in their action causing both increased needs and increased losses of numerous essential nutrients including amino acids, vitamin C, calcium and magnesium. Over time the GI tract is also damaged further, limiting the flow of nutrients needed for maintenance and repair of tissues.

We must remove the causes of why the body is engaging in inflammation and address those causes specifically. Sadly, when physicians graduate, they are ill prepared for working with patients with severe inflammatory problems, leading them to seek ways to suppress inflammation rather than uncovering and addressing the causes of it. In this regard corticosteroids are an easy road for the physician to take.

Understanding nutritional biochemistry and the causes behind inflammatory responses has long been a priority at the Goldberg Tener Clinic. We have developed our skills through a combination of academics, personal experience with illness, internships in Natural Hygiene, practice experience, teaching clinical nutrition and by developing an understanding of clinical topics related to inflammation e.g. dynamics of the Arachadonic Fatty Acid Cycle, gut dysfunction and dysbioisis, glucose dysregulation, protein putrefaction, bowel overgrowth, carbohydrate fermentation, stress related illness, etc. All of these can contribute to poor health and inflammatory responses. Understanding these and other topics both academically and practically helps us to help patients. (Below, see a few examples of patients we have worked with who had been given steroids and are now healthy and steroid free.)

Monitoring inflammatory levels via the sedimentation rate and the HsCRP helps to keep us focused objectively towards the patient’s recovery as we follow these parameters to track our progress (see below). Medical Physicians are commonly befuddled on how our patient’s inflammatory markers almost invariably improve despite the fact that the patients have gotten off their steroids and other anti-inflammatory drugs. Functional tests such as fatty acid, digestive and immune system analyses are often productive in pinpointing the steps we need to take to help bring the patient to recovery but of particular value is understanding how the patient got sick in the first place and a thorough case history and hygienic review of the patient’s habits reign supreme in this regard.

Most important, however, is for the patient to understand the process. To understand the need to be perseverant and not hastily jump back on steroids to ease their discomforts even when those discomforts are troubling. When patients can see that there is a light at the end of the tunnel if they work together with us in a persistent and dedicated manner…. if they decide to get off the drug train and employ the will to get well along with definitive actions…then the beacon of light leading to recovery becomes visible. Taking the right steps needed for each case, even when the journey might be arduous, we can arrive at our health destination and our own personal victory over disease.