Building Health Rather than Treating Disease 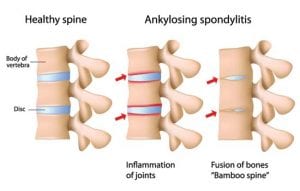 Ankylosing Spondylitis is a variant of Rheumatoid Arthritis. It is a systemic autoimmune condition affecting the entire body with its greatest impact being on the spine. In those afflicted, bridging forms from vertebra to vertebra until, in advanced cases, the spine becomes highly rigid and immobile as opposed to having individual, mobile vertebra. The SI joints often fuse and the patient’s mobility can be severely limited with the muscles, ligaments and tendons likewise affected. In advanced cases there is a great amount of disability.

Due to its systemic nature, other body systems are commonly affected including the eyes, cardiovascular system and gastrointestinal tract. Patients often find themselves seeing a Rheumatologist, Gastroenterologist, Ophthalmologist or other Specialist all prescribing similar even identical drugs (under different names) including NSAIDS, Steroids (see article “Problems with Prednisone”), pain killers and “Biologicals” that carry with them extremely dangerous side effects including lymphoma (cancer) and increased susceptibility to infections including tuberculosis.

It has been our long experience over the past forty-five years that patients with Ankylosing Spondylitis and other Rheumatoid Conditions can be improved with a thorough work up, the right guidance, patience and hard work.

Dr. Goldberg was diagnosed with Ankylosing Spondylitis in his twenties along with other autoimmune disorders. Today, in good health and 70 years of age, he says that experience changed his life for the better, as it was integral to the direction his career as a health practitioner took. Due to his experience, Dr. Goldberg wrote his Masters Thesis at the University of Texas Medical Center School of Public Health on A Biolistic Approach to Rheumatoid Disorders, which evolved over the following decades into the Goldberg Bio-Hygienic ReCreation System™. He also taught Clinical Courses to Chiropractic and Nutrition Students for 37 years focusing on Rheumatoid and Gastrointestinal Disorders, Clinical Nutrition and their inter-relationships.

In cases where causal factors are identified and addressed, the progressive nature of Ankylosing Spondylitis like other autoimmune issues, can usually be halted and in most cases significant reversal of the patient’s illness can be accomplished. This is evidenced by the many case studies including before and after laboratory studies that are presented on www.goldbergtenerclinic.com.

Two major errors are made by the Medical Profession in addressing Ankylosing Spondylitis:

(1) Treating patients with drugs rather than addressing causal factors and building health.

(2) Not addressing patients as individuals who require a highly individualized approach.

See over fifty video interviews with our patients who successfully reversed Ankylosing Spondylitis and other related Rheumatoid Disorders.

We Do Not “Treat” Disease. We Build Health™

For over forty five years we have successfully assisted patients with Ankylosing Spondylitis and other Rheumatoid Disorders including Rheumatoid Arthritis, Psoriatic Arthritis, Polymyalgia Rheumatica, Lupus and Fibromyalgia. “Treatments”, as utilized in standard or alternative medicine, are not employed. Our patients reverse their chronic disease conditions, with our guidance, by addressing causal factors and setting into motion the optimal conditions to be Re-Created™.

Learn more about our unique approach to bringing our patients back to good health… The Goldberg Bio-Hygienic Re-Creation System™.