History of the Goldberg Tener Clinic

A Beacon of Light For The Chronically Ill

Many years before natural health care came into vogue and decades before the current fad of  “functional medicine,” “integrative medicine”, “complimentary medicine” and “anti-aging medicine,” The Goldberg Tener Clinic was established with a focus on the reversal of chronic diseases by addressing their causes.

The Goldberg Tener Clinic is an institution whose history evolved out of one person’s quest to help others reverse their chronic disease conditions after successfully doing so himself.

The Goldberg Tener Clinic today is the outcome of both an extensive professional education and over forty years of clinical experience by its founder, Dr. Paul Goldberg, who can say to those suffering from chronic disease, “I’ve been there, done that.”

The Goldberg Tener Clinic today assists others in reversing degenerative disease conditions in a logical manner, combining the best of science and nature. Our goal is to assist those who have lost hope of regaining their health return to an active, comfortable life and take control of their destiny. 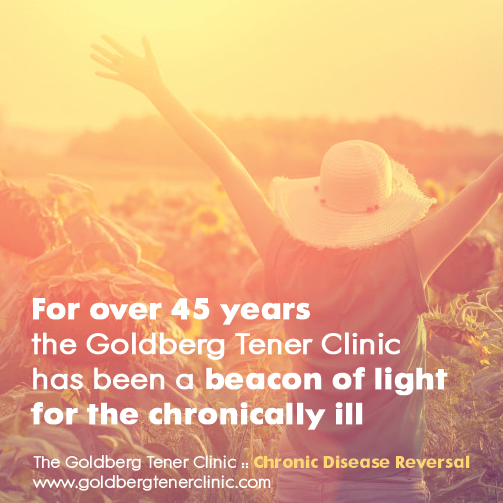 A Dark Beginning, Early Lessons and the Search for Help

Pain and disability are dependable motivators. Dr. Goldberg as a young man had a large dose of both these goad him into action. In his early twenties he developed excruciating joint pains throughout his body accompanied by oppressive fatigue, ulcerated bleeding bowels and perfuse muscular pains. A competitive swimmer and bicyclist who relished an active lifestyle, he was devastated by increasing physical disability. This was compounded by his being engaged at the time in a joint degree program in Law and Preventive Medicine at Ohio State University. He was alarmed by what physicians told him. The Medical Physician’s diagnosed him with ”Rheumatoid Arthritis, Ankylosing Spondylitis and Ulcerative Colitis”. In 1975 the medical outlook for these diagnoses, like today, was gloomy. He was hospitalized and told that steroids, painkillers and the possibility of removing his colon were his only options. A gloomy future of disability, he was told, would be his fate.

Unwilling to accept such a dark future and after ten miserable days in the hospital, the future doctor began his quest for answers. Somehow he had gotten into this mess and he believed, there was a way out of it…if he could find it. He consulted with numerous medical physicians including those who labeled themselves “Holistic”, to Osteopathic and Chiropractic Physicians, to Herbalists, Oriental Medicine Practitioners, Naturopaths and  “Nutritionists.” He read medical texts, health store books and went to all types of health and disease lectures. In turn he received a myriad of herbs, therapies, supplements and remedies meant to “treat” his disease. As in standard medicine the emphasis was still on the treatment of the manifestations of disease as opposed to addressing the causal factors that led to the disease.

Dr. Goldberg discovered that the “treatment” of symptoms whether by steroids or by willow bark, by antibiotics or by herbs, whether the practitioner calls themselves a “standard, alternative, complementary, integrative, functional” or other often misleading titles, still focused on treatments rather than identifying and addressing causes.

Discouraged, Dr. Goldberg nonetheless continued his quest and was rewarded for his perseverance as a more rational approach to understanding health and disease gradually became evident to him.

Opportunity at a Bookstore!

By chance, while looking through an old bookstore, he came upon the writings of Drs. John Tilden and Herbert Shelton, introducing him to a philosophy of health based upon understanding man’s biological requirements. This helped Dr. Goldberg understand how disease evolves when our biological needs are not met and conversely how by creating the right health promoting conditions for the individual, health can be restored.

Soon after, on a bitterly cold December Night, Dr. Goldberg drove out of Columbus, Ohio and ventured to the West Coast of Florida to a Hygienic Institute. He was accepted as both a student and staff member and remained there for one year eventually becoming the Institute’s Director. Here he witnessed first hand how seriously ill people, living in accordance with Natural Laws, could restore their health viz medicae naturae, i.e. the healing power of nature. He witnessed the reversal of so called “incurable” diseases, not through treatments but by creating the right conditions of health. This experience and the recovery of his own health formed the foundation of the Bio-Hygienic Re-Creation System™ which was further developed and fine turned through additional academic training and years of clinical experience. 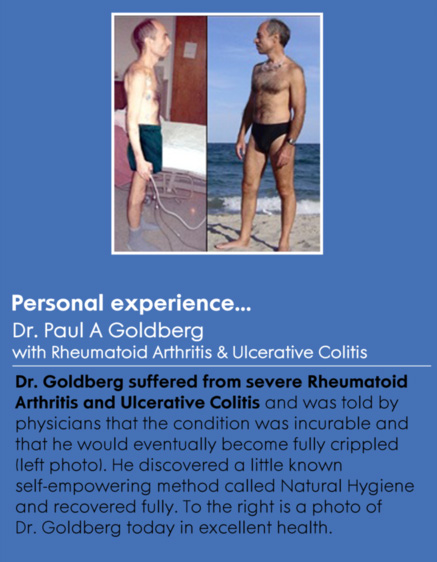 For over 40 years The Goldberg Tener Clinic has helped thousands of patients overcome a wide variety of health conditions. Arrange for an appointment today or inquire about how we can assist you with your health concerns.
New Patients Click Here! 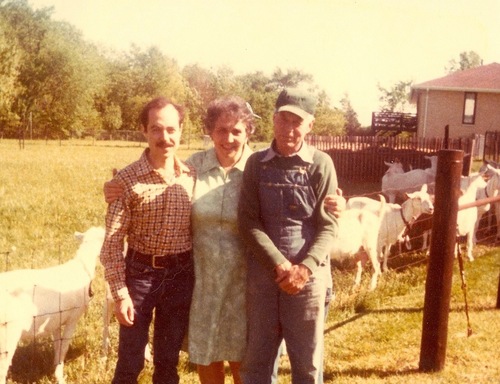 At a goat dairy farm in Peoria, Illinois, 1979. Working for the State of Illinois and the Federal Government as a Health Planner/Epidemiologist

After a year at the Hygienic Institute and the opportunity to witness how the right conditions could restore health to “incurables” while seeing his own health flourish, Dr. Goldberg continued his academic studies in the field of Chronic Disease Epidemiology.

In 1977 he was accepted for a U.S. Public Health Service Grant at the University of Texas where he undertook studies in chronic disease control/ epidemiology to further understand the origins of chronic diseases. Writing his thesis on “A Biolistic Approach to Rheumatoid Diseases” he graduated and was recruited by the Federal Government as a Health Planner, focusing on the increasing incidence of mental and physical disorders in the population.

While helping communities develop strategies to combat increasing disease in the population, Dr. Goldberg yearned to work with individuals suffering from chronic diseases and help them find renewed health as he had done for himself.

He was hired as an Instructor at a Chiropractic College in Atlanta to teach Clinical Nutrition and Public Health while given the opportunity to work towards a Doctor of Chiropractic Degree.

Rising to the rank of Full Professor his college affiliations and published articles on chronic disease reversal opened many doors and he became a sought after speaker on the topic of chronic disease reversal particularly in the areas of autoimmune/rheumatoid diseases, allergic problems, gastrointestinal disease, diabetes and cancer. With the opening of The Goldberg Clinic for the Reversal of Chronic Diseases in 1983 (see photo), Dr. Goldberg became fully engaged as both health care practitioner and professor. Since that time he has earned two diplomates in clinical nutrition, taught over 25,000 students and practitioners and brought thousands of patients with “incurable” diseases back to good health.

In 2010, the Goldberg Clinic was fortunate to bring on board Dr. David Tener who became the Director of the Goldberg Tener Clinic in 2020. 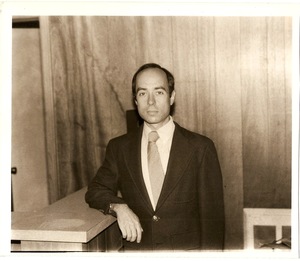 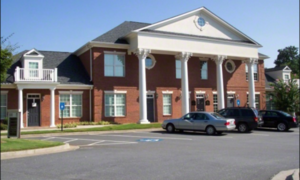 A key element in the evolution of the Goldberg Tener Clinic and its approach to health and disease is the concept Dr. Goldberg began to employ early in the clinic’s history, which he refers to as Re-Creation™.

Over the decades Dr. Goldberg developed and refined ways to optimize the catabolic/anabolic process so that patients literally go through a metamorphosis of breaking down older, inferior, tissues and replace them with new, more vital and healthy body tissues… transforming their health and creating new and healthier bodies.

Many of the clinic’s before and after photos of patients (as seen on this website under “Success Stories”) show the metamorphosis that takes place with patients, not only experiencing relief from disease symptoms but looking and feeling younger with dramatically improved skin and muscle tone, brighter eyes and an overall look and feel of total body rejuvenation.

Unlike other clinics where nutrients and therapies are forced upon old tissues (like taking your car for an oil change and having the technician pour new oil in without first draining the old oil out) the Re-Creation™ process, developed and refined by the Goldberg Tener Clinic, allows for the breakdown of old, inferior tissues that have contributed to disease and their replacement with new, healthier tissues allowing for a renewal of health. This represents the Art and Science of Clinical Epidemiology, Nutritional Biochemistry and Hygienic Practice all merged into an individual approach for each patient.

An Ongoing Tradition of Excellence

Today, over forty five years after Dr. Goldberg’s journey back to health began, the Goldberg Tener Clinic is a beacon of hope to those with chronic health issues seeking to begin their road back to health. No magic pills or therapies but rather serious investigation as to the causes of ill health and the construction of an individualized program to help them recover their health. Today patients come from across the United States and internationally, to work with us in the restoration of their health.

In 2013. Hygieia, located in Brooks, Georgia was opened. Located on ten acres of beautiful land, Hygieia is used, in addition to the Clinic in Tyrone, Georgia, as a health education center, a Retreat and for organic gardening.