The Tragedy of Thyroid Hormone Replacement

Posted at 02:46h in Uncategorized by David Tener 0 Comments
0 Likes

The Medical Destruction of Women’s Health 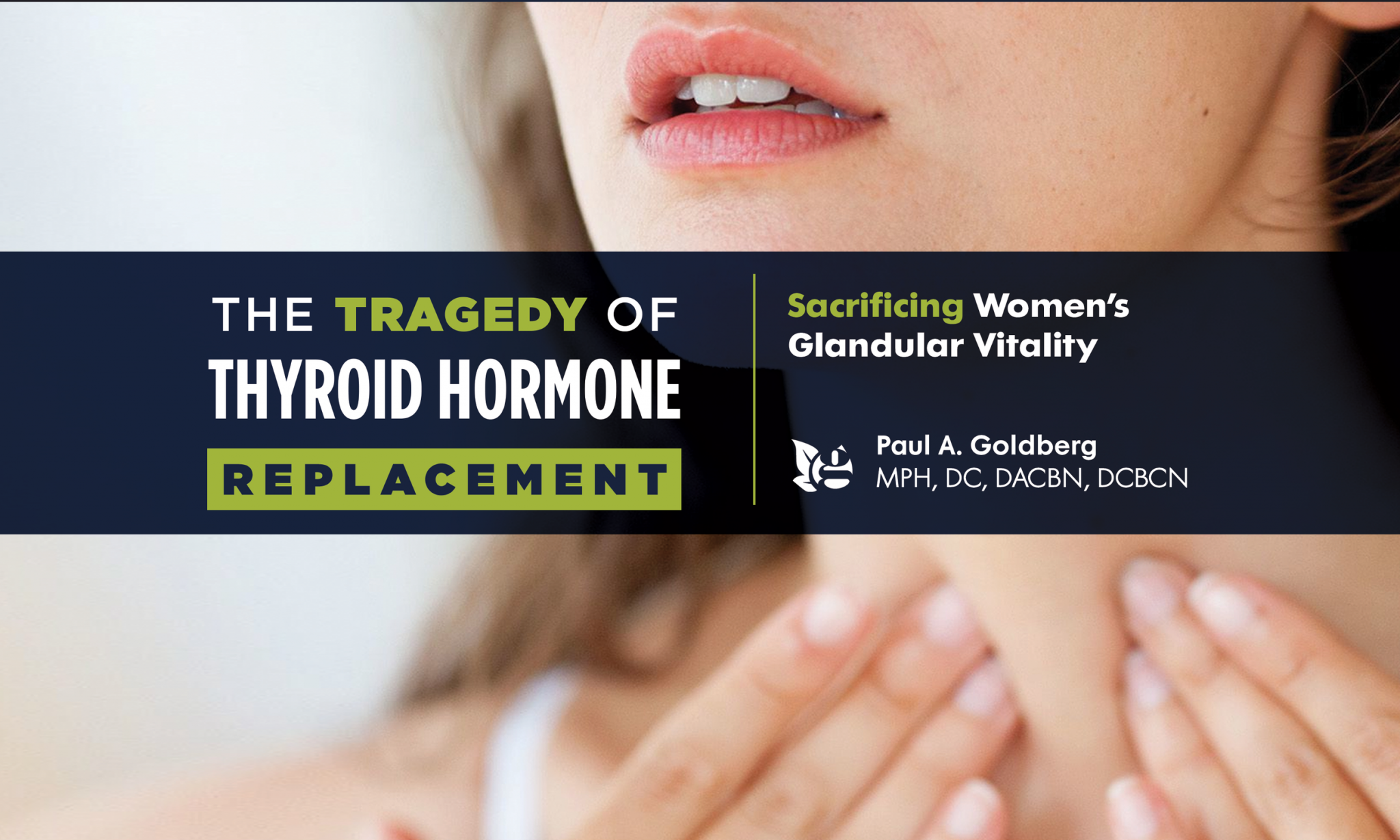 As both a practitioner and a former Professor I have for many years criticized Medicine’s indiscriminate prescribing of hormones of many types, particularly thyroid hormone in the form of Synthroid, Armour Thyroid, Naturthroid and Levothyroxin. At the Goldberg Tener Clinic, we can conservatively state that well over 70% of the adult women coming to us for help for a variety of chronic diseases have been prescribed and are taking thyroid hormone replacement. This is being prescribed by both standard medical physicians and even more so by so called Functional/Alternative/Complimentary Physicians.

The article below which I wrote a number of years ago explains the dangers of the reckless prescribing of hormones rather than looking for and addressing the causes of disease. Low thyroxin output is not a cause of itself…it is a symptom whose causes should be identified and addressed to help bring about a return to health, not the ultimate destruction of the Thyroid Gland that occurs by ongoing usage of the hormone. The success of taking the time to identify and address causes in such cases is illustrated by the patient interviews presented within the article.

The Goldberg Tener Clinic Works with Patients Across the U.S. and Internationally. Click Here to Learn More.

During a recent week at the Goldberg Tener Clinic we saw six new female patients, three of whom were on Synthroid, a synthetic thyroid hormone drug. This was not an unusual week. For many years I have noted, with great alarm, the large numbers of women, some only in their twenties and thirties, who are being placed by medical physicians on thyroid hormone replacement.

The amount of glandular abuse I have observed over the past thirty years, that has been done to women via the medical profession is appalling. Needless hysterectomies lead the list. Unnecessary destruction of the thyroid gland is also much too common. This occurs medically via “replacement therapy” i.e. having the patient take thyroid hormone causing the patient’s own gland to degenerate over time or by surgical extraction or by the practice of having the patient drink a radioactive iodine solution which is attracted to the gland and destroys it. In cases of hyperthyroidism, after the patient’s thyroid gland is excised or radiated to destruction then the patient becomes hypothyroid and so enters into a lifetime contract of medical care along with bondage to the pharmaceutical industry for thyroid replacement hormones.

In hypothyroid conditions it is a one-two punch…the patient comes into the physician’s office complaining of chronic fatigue and/or weight gain. A blood test is done and if the test comes back with elevated thyroid stimulating hormone (TSH), then bingo, a prescription is written for Synthroid or Armour Thyroid without investigating why the thyroid is not working well or giving consideration as to what the long term effects of taking the drug might be.

Synthroid (short for “synthetic thyroid”) is one of the top five prescribed drugs in the United States. The physician assumes that since the thyroid appears to be making insufficient thyroxin that a drug should be employed as a replacement. Rarely is the question asked “why is the thyroid not producing sufficient thyroid” followed by “how can we address the causal factors leading to poor thyroxin output to restore the gland / body to optimal function?”

The endocrine glands work as an integrated system. If there is a problem(s) there are causes behind it that need to be addressed. Yes, it is easier to simply say “take this pill”…but at what great cost to the patient?

The thyroid gland controls metabolic rate…it is a governor of the body. It secretes both thyroxin (T4) and triodothyronine (T3) in order to do this. Whether we are going to be mentally stable, energetic, heal well and have good resistance to disease or be depressed, fatigued, heal poorly and become overweight (among other things) depends upon a well functioning thyroid gland.

Taking Synthroid causes the Thyroid, the gland that controls so much of what makes us alive and vital, to atrophy, until the gland loses its ability to function, making the patient permanently dependent on the drug. In addition many women taking Synthroid continue to suffer with symptoms of fatigue, depression, overweight, poor libido, rapid aging, etc as well as developing new complications from the drug itself.

This need not be the case. Over the past thirty-five years I have worked with many women who chose to address their overall poor health and under active thyroid by addressing causal factors. Each case is different but in general the following factors are important to evaluate.

In all cases, a careful individualized work up is essential as each patient differs from the next. A thorough interview and appropriate lab tests help sort these matters out followed by having the patient follow a detailed health plan…not simply to “treat” the thyroid, but to address their full health picture.

Over time the thyroid degeneration that occurs with Synthroid is irreversible, but we have had cases where women who had been on the drug were able to come off it successfully and restore their health.

Patients should always first make every effort to address causal factors and take health-promoting steps prior to resorting to drugs for an answer since even the natural form of thyroid replacement leads to gradual loss of thyroid function. Pharmaceuticals can always be taken later but restoring the thyroid gland to a high level of health after being on drugs for an extended period is not always possible.

Women should be vigilant not to accept the all too quick medical approaches that often lead down the road of permanently impaired health. Looking for causes rather than for “treatments” is the place to start.