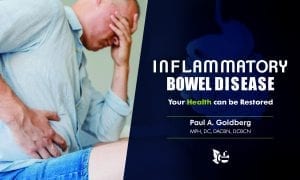 Inflammatory Bowel Disease (IBD) refers to inflammatory diseases of the intestines including Crohn’s Disease and Ulcerative Colitis both considered autoimmune disorders. Patients with IBD can suffer with numerous symptoms including bloody diarrhea, intestinal cramping, ulceration of the colon, anemia, fever and fistulas. Both conditions typically also produce a number of symptoms outside the gastrointestinal tract including severe fatigue, joint and muscle pains and skin disorders. These diseases can be life altering and life threatening. Crohn’s Disease and Ulcerative Colitis start most frequently between the ages of 20 and 40, although no age is exempt. We have seen many children and teenagers medically diagnosed with these as conditions. Patients with IBD don’t simply have an issue with their colon or small intestine…they have a systemic body wide issue that needs to be addressed as such.

The number of people in the United States suffering with some form of Inflammatory Bowel Disease (IBD) is increasing as are other autoimmune disorders. Patients seeking medical care for these issues find themselves in a never-ending exhausting ordeal of drugs, physician visits, colonoscopies (see article “Serious Considerations Regarding Colonoscopy”) and surgeries leading to a lifetime of misery. Steroids (prednisone) remain mainstays of initial “treatment.” These start the patient on a dismal path often leading to complications including diabetes, osteoporosis, adrenal exhaustion, premature aging and other issues (see article “Problems with Prednisone”. As the disease increases, which is the norm under medical care, “biologicals” are employed such as Remicade, Humira, Enbrel and Entyvio. These immune suppressing agents can temporarily relieve symptoms but at great cost to the patient (see article “The Dangers of Biological Drugs”). Serious toxic side effects can and do occur including lymphoma (cancer) and severe infections as the body’s immune defense mechanisms are pharmaceutically compromised.

In those cases where drugs afford some temporary improvement in symptoms, the relief is often short lived and the patient often finds him or herself with serious complications occurring. In time, the drug list often becomes longer and longer, both for the drugs prescribed and for additional drugs to suppress the side effects of them. In some cases, the patient becomes exhausted by the ongoing “treatments” and now at the end of their rope, consents to surgery.

Removal of part or all of the colon and/or part of the small intestine leaves the patient permanently compromised. Since causes have not been addressed, the patient often faces further surgery till at last, when no more intestinal tissue can be “spared.” the patient is told “we did everything we could to help you, there is nothing more we can offer. You will just have to live with it.” There are reasons why people develop Ulcerative Colitis and Crohn’s Disease and drugs and surgery do not address those causes.

Some will say that Inflammatory Bowel Disease is genetic in nature and there is nothing to be done other than submit to pharmaceuticals and surgery. Such an attitude is mistaken. A genetic component is indeed present in some cases but this should not lead to submission to a life of misery and disability. Our genetics predisposes us to develop certain conditions but by altering environmental/nutritional/hygienic influences (“epigenetics”) we can help compensate for genetic flaws and help patients head down the pathway to good health. Shown below are three video interviews with patients from our clinic who successfully restored their health under our care. Additional case studies are shown at the end of this article.

The patient with inflammatory bowel disease is more than just a sick colon or small intestine. He or she is sick all over. Identification of causes and the implementation of health building measures is the path that leads to increased vitality and improved function not just control of symptoms. The Bio-Hygienic Approach™ works to literally Re-Create the body™, to allow for the renewal of health. Administering drugs to patients already exhausted can be counterproductive. These patients need health building measures. The need to build health is a need that should not be ignored.

Through the Goldberg Bio-Hygienic Re-Creation System™, patients have the opportunity to understand the causes of their health issues, improve their health and normalize function. The earlier the right path is taken the more favorable the outcome.

Getting well requires a detailed investigation of causes, the development of a personalized Bio-Hygienic Re-Creation Plan™ to rebuild the body, accompanied by hard work and perseverance. For the patient who has the will to get well, the outlook for improving chronic inflammatory bowel disease and regaining health utilizing the Goldberg Tener Clinic Bio-Hygienic ReCreation System™ can be a favorable one.

For over forty-five years we have successfully assisted patients with a multitude of chronic disease issues regain their health.

The Goldberg Bio-Hygienic Re-Creation System™ focuses on reversing chronic disease by addressing causal factors and creating the optimal conditions for the individual to be Re-Created™. “Treatments” as commonly utilized, whether standard or alternative, are not employed. We do not treat any form of disease…we build health!

The following case studies exemplify how health can be restored through the Goldberg Tener Clinic Bio-Hygienic Re-Creation System™.