The Case Against Dairy 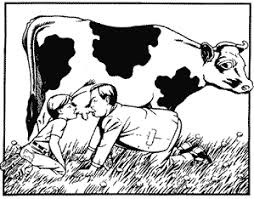 Is drinking the milk of a cow really natural?

The phrase “finish your milk” is a directive just as common in most American households as “finish your vegetables.”  Most of us can remember the famous “Got Milk” and “Milk Mustache” ads of the 1980’s and 90’s which further reinforced the need to drink milk daily if we wanted to grow up healthy and strong like our favorite athletes, movie stars and rock stars. Since that time, however, the purported health benefits of dairy consumption have gradually been called into question and concerns about milk’s role in the rising rates of obesity, diabetes, allergies, digestive disorders and other chronic health problems have been raised. Have we been sold a bill of goods?

Cow’s milk is for a calf, not a human.

Mother cows, much like human mothers, produce milk to nourish their young after birth. Both calves and human infants will naturally nurse for a finite period of time until the natural dietary can be taken. Calves nurse for a period of 8-11 months and will consume approximately 20% of their body weight per day of milk during that time. Human infants in general nurse for a period of 1-2 years or longer depending on the culture and will consume approximately 19-30 ounces of milk per day. The nutritional composition of milk for both calves and humans is finely tuned to meet the nutritional needs of each animal. The nutritional composition of cow’s milk differs considerably from human milk as seen in the figure below. Cow’s milk is the perfect food for nursing calves. Human breast milk is the perfect food for nursing human infants.

A comparison of protein, fat and carbohydrate components of whole cow’s milk and human milk (see chart above).

Once weaned, the human infant much like the baby calf will transition onto its natural dietary and the mother will no longer produce milk for her young.  It is not biologically appropriate to consume milk after the nursing period, and no species on earth will naturally do so. Not even a cow drinks milk!

Somewhere along the lines of human history, mankind extended the nursing period to include the rest of adult life. This is perhaps one of the most bizarre and illogical behaviors humans have engaged in. We make the additional mistake (and a rather bizarre one at the that) of consuming the milk not even of our own species (which would be somewhat more appropriate) but rather that of another animal for which we were not biologically designed. We have no more need for the milk of a cow than we do for the milk of a dog, giraffe or monkey.

Milk…Does it really do our body good?

The dairy industry will have us believe that cow’s milk is a requirement of human nutrition and of good health. Clever marketing tactics and advertising campaigns produced by the milk industry encourage us to take dairy products regularly to reduce the risk of osteoporosis, maintain lean muscle mass and improve cardiovascular health. The “Got Milk Mustache Ads” featuring celebrities of all kinds is one of the most recognizable ad campaigns of all time, but it is nothing more than propaganda produced by an industry that stands to make millions of dollars from our ongoing consumption of their products.

Dairy products are a health hazard. Milk is one of the most common offenders for those with digestive, allergic, hormonal and autoimmune conditions. The proteins in cows milk (casein, whey, lacto-albumins) are particularly offensive which is why dairy is one of the most common food allergens seen in medical practice. Further complicating matters is our inability to digest milk sugar, lactose, beyond the age of one at which time we no longer produce the enzyme lactase.

Anderson came to the Goldberg Tener Clinic in 2013 after having received a diagnosis of Juvenile Rheumatoid Arthritis. He was previously treated medically with steroids and oral antibiotics as per his Rheumatologist. When these failed to control his symptoms, stronger immuno-suppressant drugs (Biologicals) were recommended but his parents refused. Specific allergy testing performed through our office revealed that he was severely allergic to dairy products (see test result below). Pulling him off dairy was one of the factors that allowed him to regain his health. Within 30 days, Anderson’s symptoms resolved. He is drug free.

Cows milk is also brimming with estrogens and growth hormones that are problematic for humans. These hormones are not only a natural component of the milk produced by recently pregnant dairy cows, but they are also increased by dairy farmers that routinely inject cows with hormones to increase milk production. This contributes to a variety of health issues not only for the cow (mastitis, infertility, shortened lifespan) but also for the humans that consume their milk:

Does milk consumption really reduce the risk of Osteoporosis?

The commonly accepted notion that we need to drink cows milk in order to have strong bones is the result of a very successful marketing campaign by the dairy industry. This long held belief is not as accurate as we have been led to believe and may in fact be the exact opposite of what we’ve been told.

Despite its high calcium content, the consumption of dairy products actually contributes to the development of osteoporosis. This has less to do with calcium and more to do with milk’s high protein content and high acidity which depletes calcium from bone tissue over time. The promotion of dairy products as the “answer” to osteoporosis by the dairy industry is not only self-serving by downright inaccurate and dishonest.

Dairy products are not the only source of calcium. There are many plant-based foods that are rich in this bioavailable mineral:

Life on a conventional dairy farm is far from the paradise portrayed in advertisements and in the images of “happy” cows on milk cartons and yogurt containers. The life of a dairy cow is grueling. In order for them to continue producing milk, factory farm operators typically impregnate them through artificial insemination each year. Once they’ve given birth, their calves are stripped from them within 24 hours, a cruel practice which causes both the mother and calf considerable distress. Mothers are often heard calling for their young for days. Male calves end up in veal crates or feed lots where they will be slaughtered for beef. Females are sentenced to the same fate as their mothers.

Drugs are often used to force dairy cows to produce as much milk as possible. The average cow today produces 4x more milk than they naturally would on their own. Many are dosed with recombinant bovine growth hormone (rBGH) which contributes to mastitis, an extremely painful inflammation of the udder. Once the cow has worn out from the stress of repeated pregnancy and lactation, it will be slaughtered and turned into food for dogs and cats or ground beef. The average dairy cow will survive only 5 years as a result of such inhumane factory farming practices.

Cows are intelligent animals that love, play and feel just like our beloved pets at home. These dairy cows (portrayed in the video below) were saved from slaughter by members of the local neighborhood. Cows are usually happy when they are let out in the Spring, but this herd was especially excited having been freed from giving milk until their body’s give out and or from losing their calves immediately after birth.

Be mindful of how your food choices affect the environment, your health and the lives of these beautiful creatures that run, play and love just like our beloved pets at home.

Ditch the dairy. Your body will thank you and so will thousands of dairy cows and their calves who are forcibly taken from their mothers an early age so humans can drink their milk.