Tom traveled to the Goldberg Tener Clinic from Illinois having been diagnosed with Rheumatoid Arthritis by a Medical Rheumatologist. He received numerous medical treatments including Prednisone, Plaquenil, Methotrexate and Sulphasalazine. Predictably his condition continued to worsen.

Tom experienced numerous side effects from the drugs he was prescribed (see article “Problems with Prednisone) and endured numerous ups and downs in the course of recovering his health including periods of drug withdrawal (prednisone in particular). He exhibited great patience and persistence while working with us at the Goldberg Tener Clinic. Tom possessed what we refer to as “The Will to Get Well” which contributed to his success. 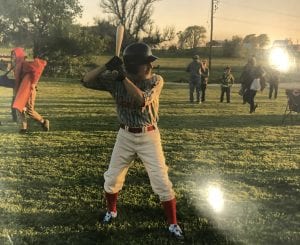 Tom returns to the baseball field after reversing Rheumatoid Arthritis.

Tom recently returned to our Clinic in May 2021 for a check up five years after his initial visit in 2016. He continues to be drug free and in excellent health with no R.A. symptoms as related in the video interview above. His laboratory studies (see before and after inflammatory markers spanning five years shown below) are entirely normal. He is now leading a full and active life including playing on a men’s baseball team (see picture) which he previously thought would never be possible in light of the medical diagnosis he had received and the debilitating nature of his previous symptoms. Today Tom describes his health as “better than ever”.

High Sensitivity C-Reactive Protein (HsCRP) and Sedimentation Rate (ESR) are markers of systemic inflammation commonly elevated in patients with Rheumatoid Arthritis and other chronic inflammatory conditions. Both levels were significantly elevated in Tom’s case initially and normalized as his health returned. Test results spanning a period of five years are shown below. 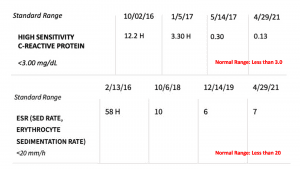