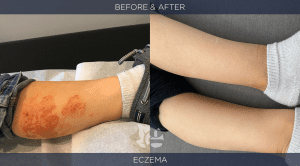 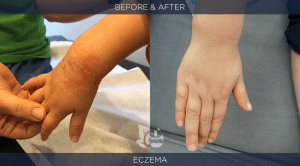 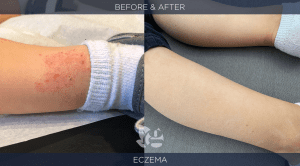 Matthew came to the Goldberg Tener Clinic suffering with chronic eczema on his legs, arms and hands. Like many other patients with chronic skin issues, Matthew also had digestive problems that developed just prior to his skin breaking out. Following a detailed evaluation including a health history, physical exam and laboratory studies, Matthew and his parents implemented an individualized Bio-Hygienic Program not simply to treat his skin but to rehabilitate his health. The result… Matthew’s digestive function normalized and his skin cleared entirely as seen in the before / after pictures shown above. The improvements achieved were accomplished without the use of drugs and other treatments.

Eczema and other similar chronic skin issues such as dermatitis, psoriasis and rashes, are commonly treated by Dermatologists with pharmaceuticals to suppress symptoms. The treatments fail to identify and address the causal factors involved and afford, at best, temporary relief of the patient’s discomforts while allowing the disease process to continue.

At the Goldberg Tener Clinic, we encounter patients with chronic dermatological disorders of many varieties, yet we never “treat” skin disorders. Rather than superficially “treating” the outside layer of the body i.e. the skin, we identify and directly address the factors responsible for the patient’s impaired health that have manifested through the skin. In Matthew’s case, dietary factors and issues with the manner in which food was being digested and assimilated were major causal factors. Gradually Matthew’s digestive function vastly improved along with his skin clearing entirely as illustrated by the before/after pictures shown above. Click here to see additional case studies from the Goldberg Tener Clinic.