Posted at 21:21h in Uncategorized by David Tener 0 Comments
0 Likes

By Paul A. Goldberg, MPH,DC,DACBN,DCBCN 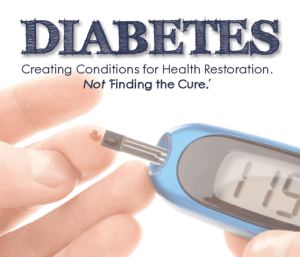 Twenty five percent of the U.S. Adult Population now either has diabetes or is classified as “pre-diabetic”. The percentage continues to increase yearly. Despite billions in research and ongoing efforts to raise yet more money for the elusive “Cure” the number of people in the U.S. and the Western World developing diabetes continues to increase rapidly. To counter this Diabetic Epidemic, Modern Medicine herds patients to physician’s offices for diabetic care and to the hospitals for “diabetic complications” while pharmaceutical companies profit bytaking in hundreds of million of dollars yearly in drug sales. “Alternative/Integrative” Medicine also capitalizes on the growing number of people with blood sugar issues with a plethora of “remedies”…yet the numbers of people with diabetes grows. These enterprises entail sales and services not only for diabetes per se but also for intimately related problems e.g. cardiovascular disease, arthritis, ocular issues, dermatological problems, infectious diseases, kidney disease, chronic fatigue, obesity, neurological issues, etc. that stem from ongoing irregularities in a person’s blood sugar levels.

Diabetes: A Basic Representation of the Ways in Which We Live

To speak of “Diabetes” as an individual issue unrelated to overall human health and human behavior is to start out on a terribly confused path. Our blood sugar levels are controlled by multiple inter-related systems of the body and by the ways in which we live or behave. A person’s blood sugar level is not simply a question of whether or not he or she can be diagnosed with Diabetes Type I or Type II or with Metabolic Syndrome or Pre-Diabetes, by some pre-set number of how much glucose is in what quantity of blood, it is a basic representation of the ways in which we live and exist as human beings, both individually and as a society.

It is helpful to stand back and look at Diabetes from an Epidemiological Perspective. We know that not only did so called primitive cultures rarely if ever suffer from such problems but that here in the United States, even a hundred years ago, it was far less common.

In England the incidence of Diabetes fell dramatically during WWII with the rationing of sugar, flour and animal flesh, simply because people consumed less food and became more active despite the stress of being surrounded by war.

Among wild animal species diabetes is virtually never seen…yet it increasingly affects domestic animals including dogs and cats when they adopt the Western Lifestyle. Frequently I have seen Diabetic Patients with their equally Diabetic Dog or Cat.

“Research” long ago revealed in the laboratory that the “thin rats bury the fat rats” i.e. that animals with reduced caloric intake who thereby avoided obesity not only avoided diabetes, just as their overweight counterparts acquired it, but that the thin rats were healthier in multiple ways including outliving those who were obese.

An inactive American Population which lives to eat rather than eats to live, who consumes far more calories than they need on a daily basis and who literally stew themselves in corn syrup drenched products and other refined carbohydrates accompanied by gluttonous amounts of animal flesh (also produced by raising animals in factory farms on a corn based diet) will not be able to escape Diabetes. The degradation of our bodies by a lifestyle of overeating and underactivity is the perfect storm for creating the metabolic nightmare that is termed Diabetes often accompanied by Obesity. Add to this lifestyles that are emotionally stressful and lack direct connections to the earth and the progression of our population to a host of “degenerative diseases” that evolve from or contribute to diabetes e.g. heart disease, stroke, kidney disease, autoimmune diseases etc. is inevitable.

Diabetes and The Illusion of Cure: Taking Control of Our Own Destiny

When physicians, scientists and pharmaceutical reps with their white coats, prestigious degrees, and large institutional buildings tell us that we need to follow their recommendations for taking drugs along with “walking for the cure” to raise more money for “research” to “cure” diabetes we obediently fall in line. We seemingly cannot resist the idea that someone else will take our money and come up with a remedy that allows us to continue to live in ways contrary to the laws of nature and yet reap no ill rewards. This is an illusion.

“If it is to be it is up to me”. There are biological conditions, which generate health and pathological behaviors that generate disease. There are causes for why we become ill.  Once those causes are identified in each person a path can be set for those willing to do the work to become well. Not through drugs…not through “alternative medicine” but by understanding causes and creating the right conditions for the individual in which to foster good health.

The following case studies from The Goldberg Tener Clinic illustrate this important message: