Posted at 14:32h in Uncategorized by David Tener 0 Comments
0 Likes

Viriato came to the Goldberg Tener Clinic in July 2016 with a medical diagnosis of Crohn’s Disease. His Gastroenterologist prescribed Prednisone, Remicaide, Entyvio, Imuran, Humira, Methotrexate and 6MP to suppress his symptoms but his condition gradually worsened over time. He had also had 40 cm of his intestine surgically removed prior to beginning care at the Goldberg Tener Clinic. At his three month follow up visit in 2016, Viriato reported 80% improvement in his overall health.

Viriato returned to the clinic in July 2018 for his two year follow up visit. He reports 95%+ overall improvement in his condition. His bowels move once daily. He no longer experiences excessive gas and bloating. His energy is excellent. He is drug free. His lab work is normal including the inflammatory indices and hemoglobin level (see below). Watch Viriato’s video interview from his two year follow up visit above and  see his laboratory studies below.

COMPLETE BLOOD COUNT: BEFORE AND AFTER

A Bacterial Overgrowth Test was conducted in Viriato’s case as part of his evaluation. The test is performed by taking breath samples over a two hour period. Elevations in hydrogen and methane gas in the breath are indicative of bacterial overgrowth and fermentation in the gastrointestinal tract.

Viriato’s initial test result (below and left) revealed a severe bacterial overgrowth. This contributed to digestive disturbances, inflammation and autoimmunity in his case. His new test (below and right) shows substantial improvement which is consistent with the many positive changes he reports in his overall health since coming to the Goldberg Tener Clinic. 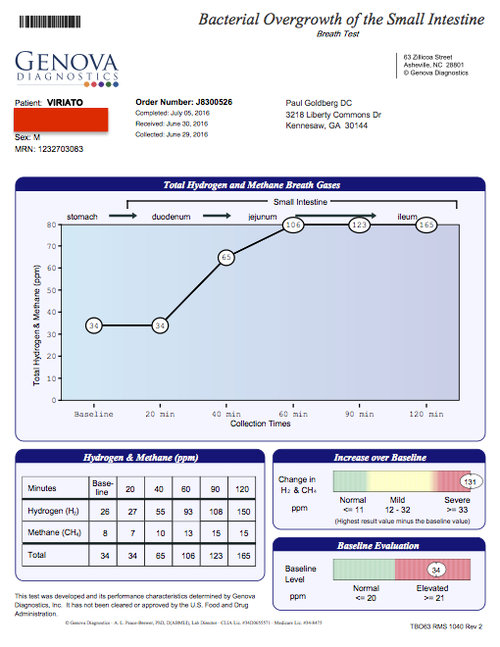 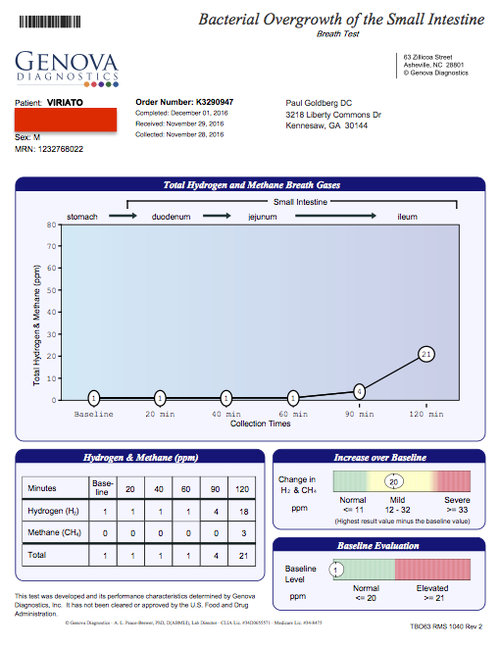