One Nation, Under a Buzz.

Posted at 16:00h in Uncategorized by David Tener 5 Comments
0 Likes

The Pitfalls of Coffee, Energy Drinks and Other Forms of Stimulation 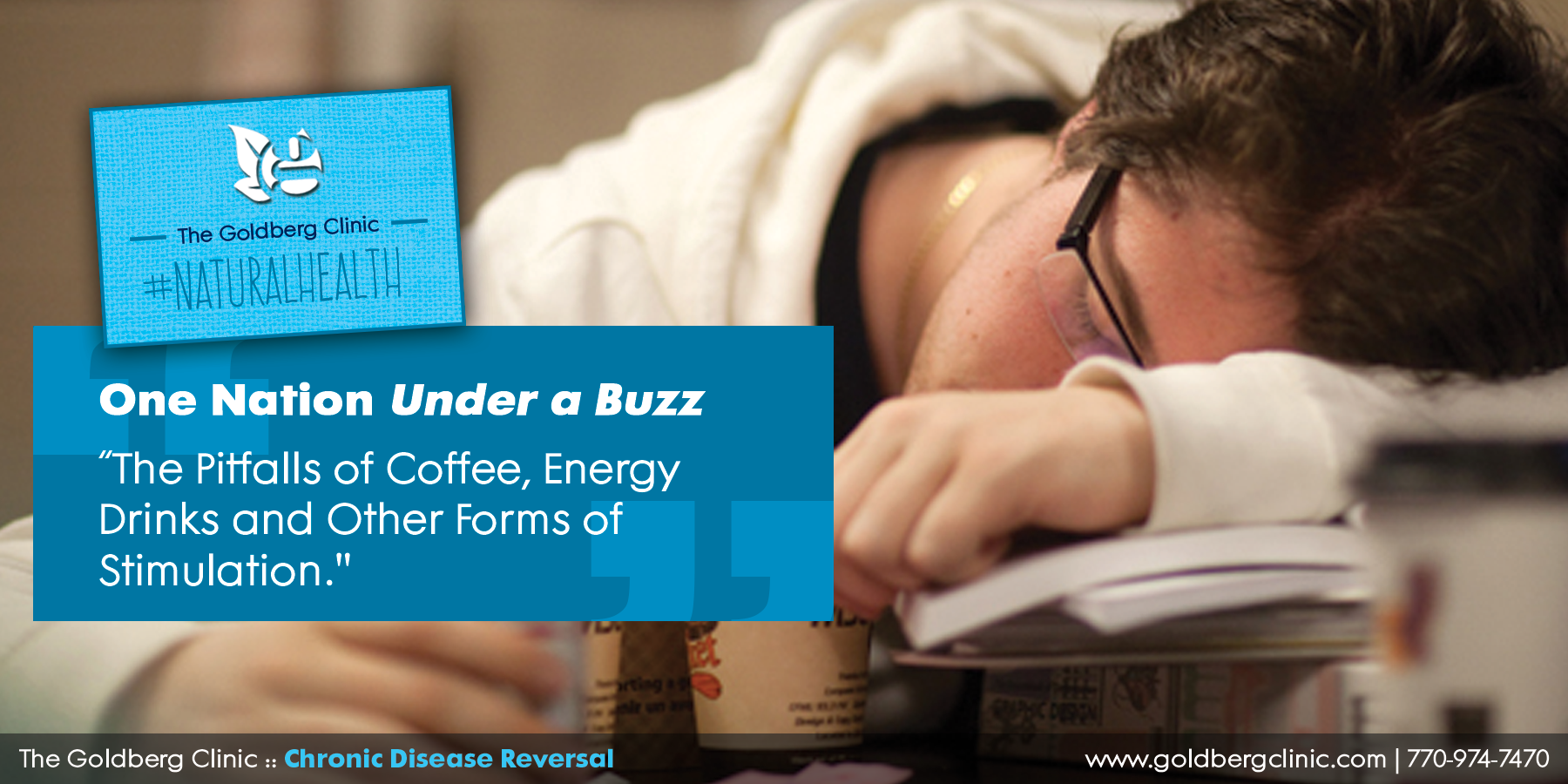 Studies report that over 90% of adults in America consume some form of caffeine on a daily basis, making it our nation’s most widely consumed drug. Whether it’s a steaming mug of morning coffee or an afternoon pick me up soda, Red Bull or 5 Hour Energy Shot, our population has become addicted to its caffeine comforts. What effect does this have on our overall health and well-being? Surprising to many people, the adverse effects can over time be significant.

Clever marketing tactics have led many to believe that as long as caffeine is consumed in “moderation” that it will not cause any problems and may even help to reduce the risk of certain diseases. “Protective against cancer”, “Reduction in Stroke”, “Low risk of Diabetes…” these are just a few of the many headlines commonly seen in major news and Internet sources. What most fail to recognize, however, is that such propaganda is largely fueled by an industry that stands to profit from our continued dependence on its products. It should come as no surprise that more and more companies are jumping on the caffeine bandwagon, producing everything from specialty coffees to caffeinated energy pills and super charged soft drinks. These companies know that you crave their products, that you can become addicted to them and, as time progresses that you suffer when you don’t consume them.

A Quick fix for the Chronically Fatigued

We’ve become a nation of bleary eyed, foggy headed, sleepwalkers in constant search of our next fix.  Morning, afternoon and evening pick me ups are a necessity for many to get through the day. On the go fueling stations (coffee shops) have sprung up on virtually every corner making this an all too easy fix for the overworked, overstressed and chronically fatigued.

The morning coffee may come as an instant relief. Within ten minutes, a brief period of stimulation ensues. The mind sharpens, responsiveness improves and a boost in energy leaves you feeling rejuvenated and ready for the day. Caffeine to the rescue! That is, until the effects wear off, leaving you feeling groggy, irritable and fatigued, reaching for yet another hit of caffeine to pick up the slack.

Caffeine and the Energy Illusion

Caffeine intake stimulates the central nervous system triggering the release of stress hormones in the body. The resulting change in physiology is a protective mechanism normally initiated in response to a perceived harmful event or threat to survival. Blood pressure rises, heart rate increases, sugar and fat supplies are mobilized, the muscles tense…all to give the body increased strength and speed in anticipation to either “fight or run (flight)” from danger. The physiological response to morning coffee is equivalent to a tiger chasing you through the woods!

Caffeine does not provide energy—only chemical stimulation. The energy felt is not from the coffee itself, but rather a result of the body mobilizing its own vital reserves (energy supply) in response to chemical stimulation (a drug). What appears to give us energy is actually draining our energy. Relying on caffeine for energy is like using a credit card to pay your bills. Repeated use eventually results in a mountain of debt (exhaustion). Long-term exhaustion/enervation sets the stage for biochemical imbalances, toxemia and the onset of acute and chronic illness.

Giving up caffeine is not a pleasant experience for most. Dr. Goldberg tells patients not to bother calling him if they feel poorly while getting off caffeine as it is simply going to happen and should be expected… that caffeine withdrawal is a reality and we just have to pay the bill to nature for our prior abuse. Unhealthy habits are certain to result in a period of withdrawal when discontinued and caffeine is no exception. Generally speaking, the more caffeine a person consumes the greater the intensity and duration of the withdrawal.

The energy debt that accumulates from regular caffeine intake must be re-paid and this can only be done by engaging in healthful behaviors that support the restoration of vitality. Extensive rest in conjunction with health promoting habits including regular sun exposure, proper eating behaviors, fresh air, proper hydration, moderate exercise, stress reduction etc. will support the restoration of our bodies to a higher level of dependable health and vitality.