You Have Been Deceived… The Misuse of Thyroid Hormone Replacement 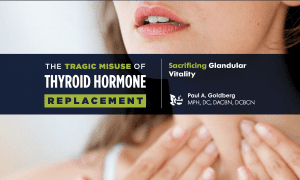 As a Health Care Practitioner and Professor of Public Health, I have for decades criticized Medicine’s indiscriminate prescribing of a number of hormones. This is particularly true of Exogenous Thyroid Hormone or “Thyroid Replacement Therapy” commonly prescribed by Medical Physicians for patients with Hypothyroidism and Hashimoto’s Thyroiditis.

At the Goldberg Tener Clinic for Chronic Disease Reversal, we have observed that approximately 60-70% of the patients coming to us for help, for a variety of chronic diseases, have been prescribed Thyroid Hormone Replacement by Medical Physicians, particularly by those referring to themselves as “Functional Medicine” Physicians (see article “The Facade of Functional Medicine”).

I noted this dangerous trend starting in the 1990’s. Identifying low Thyroxin output through laboratory studies and the patient’s history and physical examination is relatively common but the low output is not the cause of itself. If any endocrine gland including the Thyroid is identified as not secreting sufficient hormone (or an excessive amount), the next step is to find out WHY.

To prescribe Thyroid Hormone Replacement without first making the effort to identify and address causal factors is to tragically short change the patient. With the right steps, which will differ from patient to patient, health can often be restored to the Thyroid as we improve the health of the entire body. Corrective Bio-Hygienic™ steps can be taken to bring about a renewed state of homeostasis rather than crippling the function of the Thyroid Gland and disturbing the Endocrine System by the use of exogenous hormone replacement. Caitlin’s case shown below is one of many examples from our clinic illustrating that the successful restoration of health and Thyroid function is possible when causal factors are addressed and the right steps are taken.

Click here to see Caitlin’s Before / After Thyroid Labs

The amount of glandular abuse I’ve observed over the years done to patients, particularly women, via medical meddling with their glands is appalling. Unnecessary weakening of the Thyroid Gland commonly occurs by needlessly prescribing Thyroid Hormone Replacement Therapy. When the patient takes Exogenous Thyroid Hormone, it results in the patient’s own Thyroid degenerating over time, as it no longer is called upon to function. This is true whether the patient takes Synthetic Thyroid Hormone e.g. Synthroid or if they take a so-called “Natural” Thyroid Replacement in the form of Armor Thyroid, Natur-Throid or other animal based hormone.

What many patients do not understand (as it is rarely explained to them), is that once they go down the path of hormone replacement, their Thyroid Gland will gradually weaken and eventually cease to function. I explain this in further detail in the video shown below.

In Hypothyroid Conditions, it is typically a one-two punch… the patient comes into the Physician’s Office complaining of chronic fatigue and/or weight gain. A blood test is done and if the test comes back with elevated Thyroid Stimulating Hormone (TSH), a prescription is written for a Thyroid replacement drug without investigating why the Thyroid is not functioning well or giving consideration as to the long term effects of taking the drug. Jennifer’s case shown below is a classic example of this all too common scenario.

Synthroid (short for “Synthetic Thyroid”) is one of the most commonly prescribed drugs in the United States. The Physician assumes that since the Thyroid is making insufficient Thyroxin that a replacement drug should be employed. The question as to why the Thyroid is not producing sufficient hormone followed by how the gland and the entire body can be restored to optimal function is not explored.

It is important to understand that the Endocrine System is highly integrated. If there are problems then there are causes behind those problems that should be addressed. Yes, it is easier to simply say, “Take this pill”…but at what cost to the patient?

The Thyroid Gland controls the metabolic rate of the body. It is an important governor secreting both thyroxin (T4) and triiodothyronine (T3). Whether we are going to be mentally stable, energetic, heal well and have good resistance to disease or be depressed, fatigued, heal poorly, experience muscle and joint pains and become overweight (among other things) depends in large part upon a well functioning Thyroid Gland.

Taking hormone replacement drugs causes the Thyroid to atrophy. In time, the gland loses its entire ability to function making the patient permanently dependent on the drug as well as on the Physician who prescribed the drug to adjust the dosage on an ongoing basis. Many women taking replacement Thyroid Hormone soon find that they continue to suffer and develop new complications from the drug itself.

This does not need to be the case. Over the past four decades, I have worked with women and men who chose to address their under active Thyroid by addressing causal factors and they have been richly rewarded with good health and the restoration of normal Thyroid function (see examples of this here). Each case can be very different from the next but in general the following factors are important to evaluate in each patient.

In all cases, an individualized work up is essential. A thorough interview and appropriate lab tests help sort these matters out followed by having the patient implement an individualized Bio-Hygienic Re-Creation Program™… not simply to “treat” the Thyroid, but to address their full health picture.

Over time, the Thyroid degeneration that occurs with Synthroid is irreversible, but we have had many cases where women who had been on the drug for two years or longer were able to come off it successfully and restore their health. The video interview shown below is with one of our patients who successfully came off Synthroid after four years and now has normal Thyroid function.

Click Here to See Bonnie’s Before / After Blood Work

Patients should always first make every effort to address causal factors and take health-promoting steps prior to resorting to drugs since Thyroid Replacement leads to gradual loss of Thyroid function. Restoration of the Thyroid Gland after being on drugs for an extended period of time is not always possible. Drugs should the last resort not the first approach.

Women and men should be vigilant not to accept the all too quick medical approaches that often lead down the road of permanently impaired health. Looking for causes rather than for “treatments” and creating the right conditions to rebuild our health is the place to start. Learn more about the Goldberg Bio-Hygienic Re-Creation System™ and how we can assist you in reversing your chronic disease.