The number of people in the United States suffering with some variation of Inflammatory Bowel Disease (IBD) continues to increase rapidly, as does the prevalence of autoimmune disorders in general. Those seeking medical care for these issues find themselves on a never ending trail of toxic drugs, surgeries and misery. The ongoing failure to provide real help to the legions of sufferers illustrates that Medical and Alternative Medical Practitioners do not address the core causal factors producing these disease states and are failing patients desperate for help with life altering conditions. 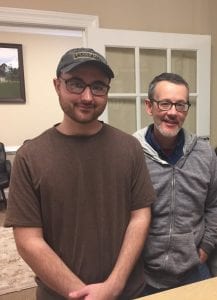 Caleb came to see us in January of 2020 suffering with Ulcerative Colitis and facing a lifetime of drug therapy and medical dependency. His recovery illustrates that Inflammatory Bowel Disease, whether termed Ulcerative Colitis or Crohn’s Disease, is not a hopeless situation. Most patients, with a carefully conducted evaluation and the implementation of an individualized Bio-Hygienic Re-Creation Program™, can recover their health and break free from the chains of medical dependency and despair. Learn more about the Goldberg Tener Clinic Bio-Hygienic Re-Creation System™ for chronic disease reversal.

We received the following letter from Caleb’s father on May 1st, five months after Caleb’s initial visit, in which he discusses the significant improvements his son has achieved.

Two things…don’t feel like you have to respond to this email. I know your time is valuable. Secondly, I can’t thank you enough for the care that you have given to Caleb.

We have long been wary of vaccines but had given little thought to the way chronic illnesses are treated until Caleb’s bout with Ulcerative Colitis. We are just now beginning to connect the dots between the pharmaceutical companies, the insurance industry, and the medical community at large. It seems that no one really wants us to be well. It seems to be a system dedicated to treating the symptoms of diseases / disorders that were not as prevalent (or didn’t exist) when I was a child. The people that are diagnosing the diseases are selling us the “cure”. Insidious.

I am thrilled at how good Caleb feels and the progress he has made. The better he gets though, the more angry I have become at the doctor (and the system he operates under) that were inches away from putting him on Humira for the rest of his life. They were just one phone call away from sentencing my son to a life of wondering if his “medicine” was going to give him Cancer. The clinic he was going to literally gave him one day to decide. They made it sound as though his ulcerative colitis was so advanced that nothing but drugs or surgery would help him. Something about that just didn’t sit right with us. I’m so glad we pumped the breaks and did some research. That research led us to your clinic.

The prevailing medical community seems hell-bent on vaccinating all of us, medicating us for every single sniffle, and cutting us. Every single visit to the Pediatrician’s office seems like a high pressure sales pitch for vaccines. I wonder how long we will be able to maintain autonomy over our bodies as it relates to vaccines. I fear that once that autonomy is sacrificed, we will never know true freedom again.

I say all of that to say thank you for giving us an alternative. That alternative has given Caleb more than his health. . . it has given him freedom. He is not chained to a drug.

God bless you and your work,