Long term study concludes that mammograms do not save lives

Posted at 20:56h in Uncategorized by David Tener 0 Comments
0 Likes 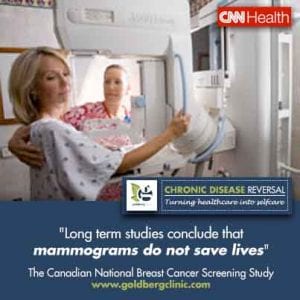 A study of mammograms spanning 25 years and thousands of patients has concluded that mammograms, largely considered the gold standard for breast cancer detection and “prevention”, appear to be useless, at best.1 The study, recently published in the British Medical Journey and widely reported by both CNN and The New York Times, has shaken the medical community because it’s one of the longest and most thorough studies to date and challenges one of the most profitable medical procedures with over 38.7 million performed each year according to the FDA.

Researchers tracked more than 89,000 women. Half were randomly assigned to mammogram screenings. The other half had no mammograms and performed breast exams on themselves. Twenty-five years later, researchers found an identical rate of breast cancer deaths in both groups. The researchers determined that overall, twenty two percent of the invasive cancers that were detected by mammograms were over diagnosed, meaning that they likely would not have presented a danger to the women over their lifetime had it been left alone. (Read the journal article in it’s entirety)

CNN reports several professional associations including the The American Cancer Society, The American College of Radiology and the Society of Breast Imaging that have challenged the validity of the study and the authors’ conclusions. Interestingly, these very organizations are amongst those that stand to lose the most financially should mammography ultimately be discredited.

Most physicians recommend yearly mammograms as the go to method of breast cancer screening, yet the benefits of mammography are controversial. The health hazards of routine mammography are well established:

For women who are concerned about the hazards associated with routine mammography, safe alternatives for measuring breast cancer risk do exist and should be considered.

Annual clinical breast exams together with at home monthly self breast exams is safe, effective and low cost. Most breast cancers are discovered by women themselves and proper training in self-breast examination has been shown to increase the frequency and number of small tumors found. 8

Thermography looks at vascular changes in the breast. Thermal imagining detects the subtle physiologic changes that accompany breast pathology, whether it is cancer, fibrocystic disease, or a vascular condition. Unlike mammography, thermal imaging is not painful and emits no radiation. Studies suggest that thermography is a safe, practical and effective means of detecting breast abnormalities. 9,10

At The Goldberg Tener Clinic, Estronex Testing is recommended for women over 35 and for those at elevated risk of breast, ovarian and cervical cancer. The Estronex Profile measures six important estrogen metabolites and their ratios to help women (and men as well) assess whether they are at risk for the development of an estrogen sensitive cancer. Approximately 90% of breast cancer is estrogen dependent, making the Estronex Test an important screening tool to assess relative risk. Based on the data collected, patients can be guided into the right health promoting behaviors to balance their ratios and thereby reduce their risk. All that’s required is a urine sample.

Mammography is not preventive. It is diagnostic. It does nothing to improve health and the risks/hazards associated with the procedure have been well established. When addressing chronic health issues (cancer or otherwise) a concerted effort should always be made to understand each patient’s genetic predispositions/weaknesses and determine how to best improve upon them by changing nutritional and other environmental factors on an individualized basis. Criteria reviewed and considered for all patients at The Goldberg Tener Clinic include but are not limited to:

It is by working to create the best conditions for health to occur that the function of all the body’s systems are optimized, genetic weaknesses are minimized and chronic health issues can be and addressed. This is in contrast to “preventive” procedures and imaging studies which neither addresses the cause(s) of disease nor prevents its development.