Drugs to Treat the Side Effects of Drugs

01 Nov Drugs to Treat the Side Effects of Drugs

Posted at 18:54h in Uncategorized by David Tener 0 Comments
0 Likes 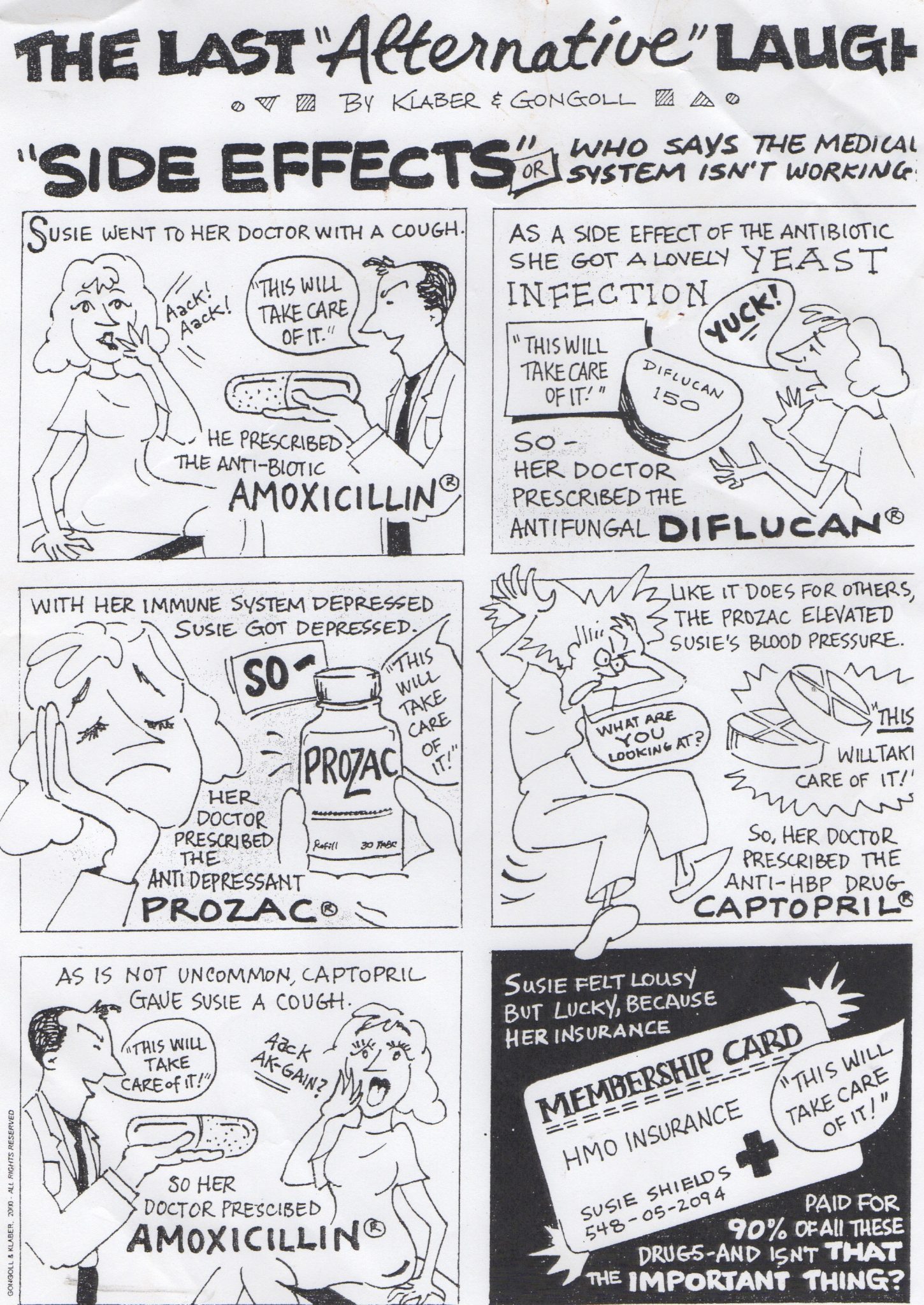 Consider this: More than 700,000 people visit U.S. emergency rooms each year as a result of adverse drug reactions. And, according to the U.S. Food and Drug Administration (FDA), adverse drug reactions from drugs that are properly prescribed and properly administered cause about 106,000 deaths per year, making prescription drugs the fourth-leading cause of death in the United States.

The following article from the 2011 AARP further explores the terrifying side effects of prescription medications:

The symptoms were sudden and severe: tightness in the chest, dizziness, nausea. “I thought I was having a heart attack,” says Lynn Golden, a 59-year-old retired scientist living in Maryland. Rushed to the emergency room, she spent two days in the hospital having exhaustive tests that all proved negative. It was only later that she discovered the cause—unexpected side effects from a prescription drug she’d started taking three weeks earlier to manage a mild thyroid condition.

Golden’s experience is a classic example of how medications can cause other conditions unrelated to the health problems they’re prescribed to treat. Unaware of this, patients very often consult their doctors about this “new” condition—only to be prescribed yet another drug that could produce still more side effects. This syndrome is known as a drug “cascade.” It’s not as well studied as more dramatic problems with prescription drugs—such as when apparently safe drugs turn out to be deadly—but it is of growing concern. Experts estimate that tens of millions of people are suffering every day—often without knowing why. “There are a lot of people taking drugs to treat the side effects of drugs,” says Gordon Schiff, M.D., an internist on the faculty of Harvard Medical School and associate director of the Brigham Center for Patient Safety Research and Practice in Boston. “And sometimes that makes sense, and maybe the initial drug is essential. But when you’re taking a drug to treat the side effect of a drug which is treating the side effect of another drug, it gets to be rather a house of cards.” 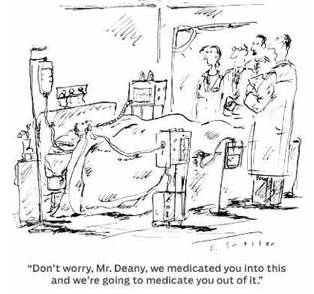 The National Academy of Sciences’ Institute of Medicine estimates that serious drug reactions occur more than 2 million times each year among patients in hospitals and are the fourth leading cause of hospital deaths, topped only by heart disease, cancer and stroke.

But the fatal or serious reactions most often reported are only the tip of the iceberg, experts say. “There are tens of millions of milder reactions, some of which are quite damaging to people even though they’re medically regarded as minor,” says Donald W. Light, a medical sociologist and editor of The Risks of Prescription Drugs, a book that reviews current evidence of medication problems.

Milder symptoms such as drowsiness, sleeplessness, muscle aches, dizziness, nausea and bouts of depression maybe more troubling than they are dangerous. Yet, Light says, studies show drugs that affect people’s sense of balance or slow their reactions are a major cause of falls and road accidents. Even gastric problems or muscle pain can seriously affect mobility and mood, hampering work, activities and family relationships.

Moreover, drugs are widely assumed to be designed to target a specific medical issue, but they rarely do. “They have effects on multiple organs,” says Schiff. “These are very complex molecules going into very complex organ systems of human bodies.”

That’s especially true for older people. “As we age, changes occur to all organ systems, and these can affect the way that medication is processed in the body,” says Mary Ann Zagaria, a consultant pharmacist in Norwich, N.Y., and a board member of the Commission for Certification in Geriatric Pharmacy. “A drug regimen that was appropriate for a 60-year-old would not necessarily be well tolerated at 70 or 80.”

More than 75 percent of Americans age 60 and over take two or more prescription drugs, and 37 percent use at least five, according to the federal Centers for Disease Control and Prevention. But older people are rarely included in clinical trials, which test a drug’s safety and effectiveness.

One reason older people are excluded is that the specific effect of a new drug can be “harder to tease out” when tested on people who are likely to have other medical conditions, says Michael Steinman, M.D., an associate professor at the University of California in San Francisco. “But also, from a drug company’s perspective, it’s advantageous to study a drug in younger, healthier people who are less likely to have side effects.” The result, he adds, is that doctors are “handicapped” by not knowing “how well these drugs work in older and sicker people who most often need them.”

Drug manufacturers spend billions of dollars persuading doctors to prescribe—and older patients to buy—the newest, most expensive medications. But studies show six out of seven “new” drugs are no more effective than “old” ones, and are riskier because they haven’t been around long enough to have an extensive safety record.

Now, many doctors are becoming warier. Schiff is one who preaches what he calls “conservative prescribing.” His very first suggestion to doctors is to “think beyond drugs” and discuss other effective methods of treatment—exercise, physical therapy and diet changes—that can improve many conditions, including high blood pressure and diabetes.

Still, it’s easier for patients to pop a pill a day instead of dieting or exercising. It’s also easier for physicians to prescribe pills, especially when people tend to want their money’s worth when making an office visit. “The patient says: ‘I took a day off work, I came down here, I want the antibiotic,’ whether they need it or not,” says Schiff.

It’s hardly surprising if overworked doctors, seeing a patient for maybe 15 minutes or less, fail to recognize a symptom as linked to a drug the person is already taking—not some new medical problem.

But, Zagaria says, people in her profession—independent consultant pharmacists trained to help older people manage all their medications—“automatically assume that a patient’s new symptom could be related to medication unless you prove otherwise.”

However, it’s not always easy to tell whether a symptom is related to a drug, a drug interaction, the underlying medical condition or a different health problem entirely. Sometimes if a drug is suspected, the only way a doctor can be certain it’s the culprit is to stop prescribing it and see if the symptom vanishes—which might be medically feasible for some conditions but not others.

“Patients can be their own best advocates in alerting their doctor to a concern that this [symptom] could be a drug side effect,” Steinman says. “Patients know themselves better than anyone else.”