Posted at 19:02h in Uncategorized by David Tener 1 Comment
0 Likes 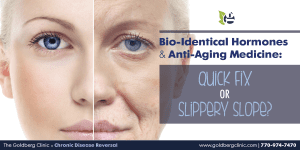 I continue to be concerned regarding the widespread hype of employing “Bio-identical Hormones” as a virtual fountain of youth. Spurred on by Actress Suzanne Summers and so called Functional Medical Doctors looking to enlarge their practices, the claims made are both misleading and dangerous. Many patients are being led down a primrose path they will in time deeply regret.

As the baby boomers reach advanced ages, there has been an upsurge of interest in “anti-aging medicine” and supposed fixes for aging. This has set off a flurry of new products and services to capture the marketplace of a public intent on restoring their youth. A mob of “anti-aging, functional medicine, integrative medicine, complimentary medicine” practitioners have proven eager to take advantage of them. Patients looking for a quick fix too often take this bait only to discover in time that there is a barbed hook that accompanies the bait. See our article, “The Facade of Functional and Alternative Medicine.”

I spoke at a conference a few years ago where another speaker gave a speech on “anti-aging medicine,” focusing on “correcting” hormonal imbalances/deficiencies of women and men by giving “Bio-Identical” Hormones. I was not impressed. Seminars of this type pushing estrogen like compounds to women, testosterone to men and other glandular compounds including the widely mis-utilized Thyroid Hormones have now attracted many practitioners looking to expand their practices. Read our article, “The Tragedy of Thyroid Hormone Replacement”.

I am concerned that many medical and “alternative” doctors are pushing exogenous hormones without understanding the serious repercussions that may result. This is being done without addressing the core reasons for premature aging, impaired health and the causal factors that need to be addressed.

At The Goldberg Tener Clinic, we know through our experience with patients who have gone down this path prior to seeing us, that the deluge of hormone based creams, injections and pills being taken by an age fearing public consumed with wrinkles, age spots, erectile dysfunction, lack of sex drive and other associated signs of aging, pose serious negative side effects to an unsuspecting public clamoring for a quick fix.

Over four decades of focusing on patients with chronic disease conditions has made me aware of the numerous factors behind chronic health problems and premature aging. It is important that these factors be addressed as opposed to applying medical treatments that carry with them potentially harmful side effects. Too many practitioners, using such labels as Functional or Complementary Medicine, are pushing quick fixes that pose health risks to patients rather than taking the time and effort to understand and address the causes of the patient’s health issues.

Is Aging Something to be Treated?

Aging is a natural process… not a disease to be treated. Taking hormones of any type can be hazardous to your health by throwing the endocrine system into disarray. This includes both standard and “Bio-identical Hormones,” an enticing but deceptive name. A hormone is a hormone. Assuming that injecting or slathering hormones into and onto our bodies will restore youthfulness opens a pandora’s box.

The use of Premarin, a horse mare derived estrogen product that was widely prescribed to millions of women over many years was discovered to significantly increase the risk of breast cancer in women and today is employed much more rarely because of that. Then the craze of Bio-Identical Hormones was brought into play as if these hormones were somehow safer. Marketing efforts, led in part by actress Susanne Summers of “Threes Company” fame, created a fresh market for practitioners to lure patients into their offices. Suzanne Summers continues to lead the charge claiming the hormones have changed her life and now in her seventies has sex twice daily every day with her husband! All that glitters is not gold, however.

Repeatedly we have seen women and men with chronic complaints including fatigue, lack of sex drive, aches and pains, depression, autoimmune disorders etc. and found their histories to include having gone to so called “Functional, Integrative, Alternative, Naturopathic, Complimentary, Holistic” Practitioners or so called “Progressive Medical Centers” where they have received hormone creams, pellets or injections only to discover that not only do their symptoms over time get worse but that others appear as a result of the disarray the exogenous hormones throw their bodies into. See the video interview above in which a patient discusses some of the problems she experienced taking Bio-Identical Hormones.

Some side effects we have seen patients develop from taking hormones include the patient’s glands decreasing or even halting production of their own hormones resulting in an amplification of the symptoms they started with. In the case of female hormone administration, a greater propensity towards the development of estrogen dependent cancers including breast, ovarian, uterine, and cervical cancer can occur. Taking hormones can present a threat to our well being whether they are called “Bio-identical” or not!

When we test estrogen derivative ratios we find that women with a history of taking Bio-identical Hormones tend to have significantly increased imbalances contributing to the potential development of estrogen dependent cancers.

Men taking testosterone rarely achieve the results they seek (despite slickly produced advertised claims to the contrary) and often experience significant side effects. When testosterone or other hormone levels are low, the overall health picture needs to be looked at carefully and the causes for poor health identified and addressed. When we have the opportunity to do this and the patient follows through, hormone levels normalize, blood sugar levels improve, weight balances, depression lifts, vitality soars and the patient’s appearance looks dramatically younger and fresher. This is assessed and documented in our clinical work by both laboratory evaluation and patient reports (see video interviews above and below). Click here to see more video interviews with patients from our clinic.

At the Goldberg Tener Clinic for Chronic Disease Reversal we have long employed a Bio-Hygienic Re-Creation Approach™. This always begins with a thorough evaluation including an extensive case history looking at all aspects of a patient’s health, a physical examination and appropriate standard and functional laboratory analysis to determine individual needs. This is followed by careful guidance and monitoring as the patient puts their plan into action. Years of metabolic wastes are gradually eliminated and the right conditions are put into play to allow for an actual Re-Creation™ of the patient’s physical being to the fullest extent possible (see before / after pictures from our clinic illustrating the Re-Creation Process™). Causes Identified, Causes Addressed…Health Restored… going for the real rather than for quick and dangerous “treatment” fixes of pills and potions. Investigation, time and effort are required on the part of the patient but the long lasting results and restoration of health are well worth it. Click here to learn more about our unique approach to chronic disease reversal, the Goldberg Bio-Hygienic Re-Creation System™.

Taking appropriate steps as we age to keep our bodies balanced and retard the aging process requires addressing individual factors that influence health rather than fixes and fads. Every person is different and there is no one size fits all approach using hormones or other products. Sensible methods of health evaluation and logical ways to address hormone levels that have become imbalanced due to aging, stress, chronic illness or improper use of hormones and other drugs, based in science and nature, are available using a Bio-Hygienic Re-Creation Approach™.

Improve and protect your health by identifying and addressing causal factors. Go for the real using time tested, individualized, rational methods as opposed to dangerous supposed quick fixes. Yes, hard work is required but the restoration of reliable health and the return to a high state of vitality make it well worth the effort.